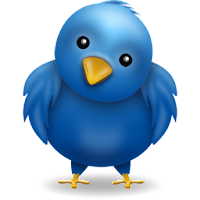 Today I changed my Twitter-ID from @DagmarSporck into @daggy72. Suddenly a lot of people wonder and ask me why I did this. Hence this blog!

When I created my Twitter-ID @DagmarSporck over 2 years ago I didn't realize this ID would consume 10% of a tweet (@ + 12characters + 1space = 14positions = 10% of 140) when mentioning me or when RTing me. Also my last name is a bit too strange for Italians to pronounce and to recall the exact spelling. So I wanted a shorter, more catchy, easier to recall ID.

Daggy
Soon after I came to Italy (for a 6 months trainee-ship) in 1995 my (Italian) friends started abbreviating Dagmar to Daggy and they still do. Some might not even know how to spell my real name. And I kind of liked it too. So when considering a shorter ID on Twitter, Daggy was the most logical option, unfortunately @Daggy was already used by someone else; who's not even making use of it, but Twitter is not doing anything about inactive accounts at the moment. Also @Dagmar was already taken so both logical 5- and 6-character alternatives where out of reach. I don't like @Daggy4 (or any other random number), @4Daggy (for Daggy) nor @_Daggy (people always have to search for the underscore on a smartphone) so @Daggy72 was the one I came up with: catchy, short (consuming only 9 vs 14 positions in a tweet), easier to remind, etc. 1972 is my birth-year by the way...

Image
There is a potential downside to it of course (every advantage has it's disadvantage -- J.Cruijf 1994): it doesn't really sound like a serious consultant, does it?! Well... I haven't really been using Twitter for business yet, and if... explaining the story behind @Daggy72 could lead to an interesting conversation whereas the formal @DagmarSporck will not raise any discussion nor questions. And besides, I don't want like a serious (=boring) image, I want to be seen as a fresh, hip and ready-for-the-future type of person, that's why I (would like to) drive Alfa or BMW in stead of Opel or VW, it's all about image!  ;-)

DAG.GY
In the meantime I also registered the domain "dag.gy" (.gy is French Gyana by the way) and connected it to my Bit.ly-account so from now on the URLs I tweet are shortened into DAGGY-Style (watch it, I'm going to be the next Google).

Epilogue
now what to do with my wife's twittername @Maddalena71, way too long..
Posted by Unknown at 15:03