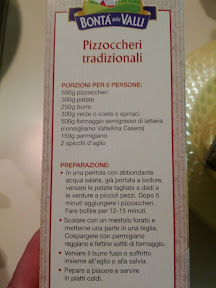 Via Twitter, Facebook and Google+ I received some requests for the recipe of Pizzoccheri. I have taken the recipe of the box of the pizzoccheri I usually buy in our local supermarket.

Ingredients (for 6p):
500g pizzoccheri
300g potatoes (in 2x2cm cubes)
150-250g butter (I think 150g is more then enough)
300g Savoy cabbage, chard leaves (the white stamps) or spinach (I prefer Savoy cabbage) sliced
500g half fat cheese from Valtellina (Casera, Bito) - these can be hard to find outside Italy, maybe Fontina, Toma or (worst case) Brie can be used as an alternative (sliced)
150g grated Parmesan cheese
2 cloves of garlic
some leaves of sage

Preparation (15-20mins):
Cook the potatoes and vegetables in boiling water, add the pizzoccheri after a couple of minutes and boil it for another 12-15mins until the pasta is nicely cooked "al dente".
When the pasta (and potatoes and veggies) are cooked drain the water and mix the slices of cheese and grated Parmesan under the pasta and veggies.
Meanwhile melt the butter on low fire with the garlic and sage (don't fry the garlic) and serve it over the pasta. 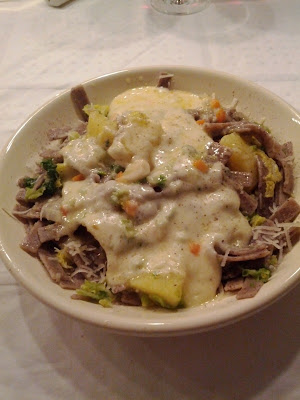